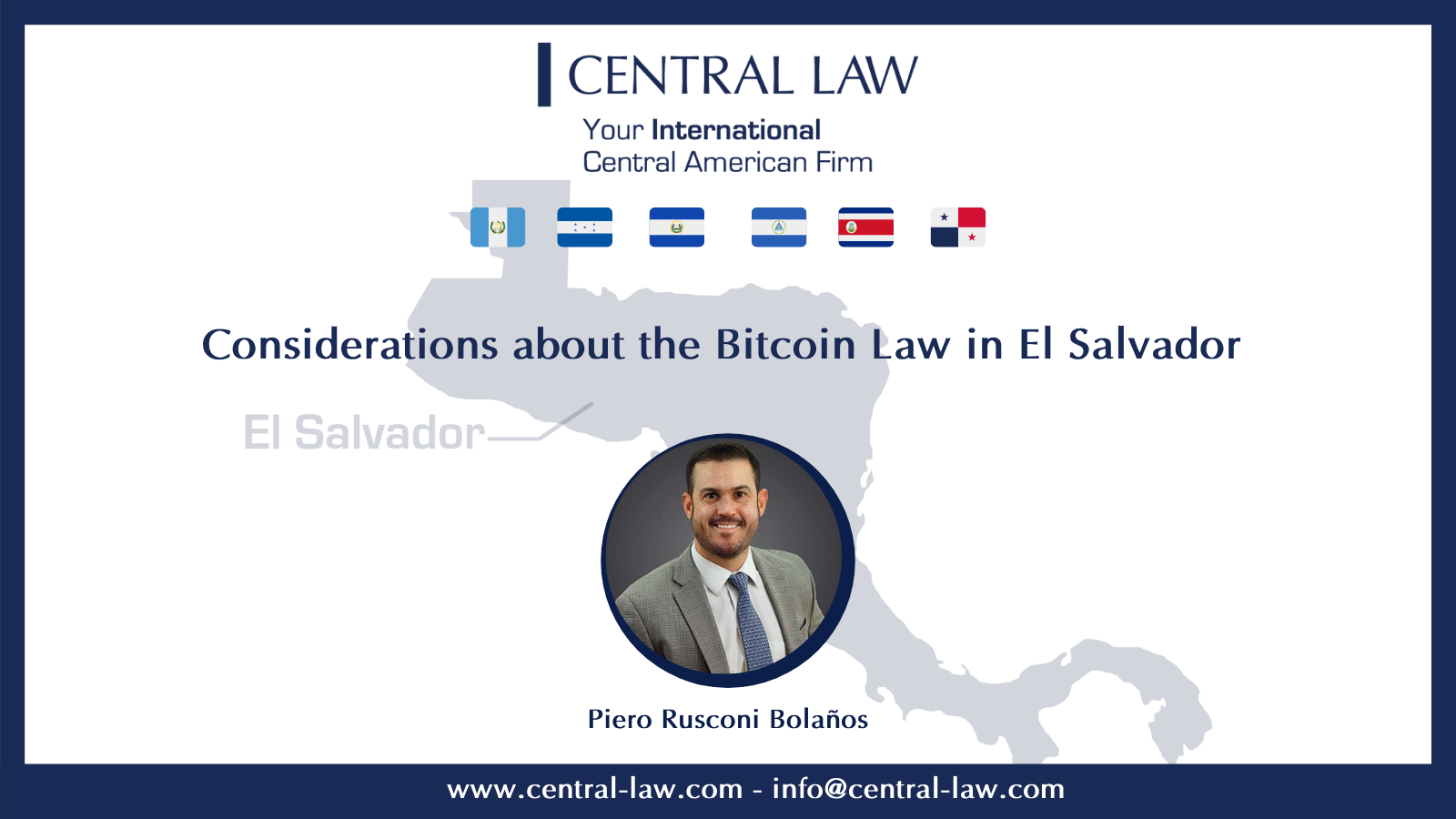 On Tuesday, June 8, El Salvador became the first country in the world to adopt Bitcoin as legal tender. That is, as a regulated and accepted means of payment under certain circumstances throughout the national territory.

The news does not stop surprising locals and strangers, since one of the main motivations of its creator Satoshi Nakamoto (pseudonym of its author or authors) in 2008, was the decentralization of a currency as a means of payment between peers, which would allow its free circulation without a central authority authorizing said transactions.

It is contradictory to the libertarian spirit with which that currency was born, that a Law would force the citizens of a given country to accept it as payment. However, before tackling this aspect, I would refer to other aspects and benefits of the Law, especially because Bitcoin did not need a Law to circulate within El Salvador; and proof of this, is the project “Bitcoin Beach” driven by Michael Peters and Jorge Valenzuela since 2019 at El Zonte Beach, La Libertad.

Therefore, said Law, in our opinion , meets other objectives such as: a) the promotion and specialization in the use of this cryptocurrency to replace traditional money, better known in the world of cryptocurrencies as fiat money ; b) a potential growth of our economy by attracting new investors or foreigners, who have great fortunes in said cryptocurrency but few places to exchange it for goods or services, as will be the case in our country; c) an additional means to achieve greater financial inclusion, to the extent that access to this technology is also guaranteed to the largest number of the population; d) a decrease in the cost of financial transactions and financing, whether granted to the public or private sector; and, e) from a political perspective, an alternative to sending the remittances that sustain our economy, in the event that the United States Government imposes restrictions or in any way taxed said cash flow to our country. Separate mention deserves the ambitious thesis that consists of the use of Bitcoin as a financing alternative for external debt, exposed in the Book “USE OF CRYPTOCURRENCY AS AN ALTERNATIVE OF FINANCIAL RELIEF TO SALVADORAN EXTERNAL DEBT”, written by Mardo Iván López, Nelson Ernesto Rivera, Pedro Ernesto Domínguez and Kimberly Michelle Sandoval, Faculty of Jurisprudence and Social Sciences, University of El Salvador.

But why would we adopt such a volatile cryptocurrency like Bitcoin? In this section, I think it is convenient to take a step back and see the photograph more widely. Bitcoin’s value has increased exponentially over the last 10 years. Just 5 years ago, it became more volatile due to speculation, the same flaw that accompanies the volatility of any currency or financial asset; Not to mention interest, where we are given a rate speculating our level of risk. We are told that Bitcoin has fallen by 50% in recent months. True, because in the same period it also rose by the same percentage from the day Elon Musk announced that Tesla, one of the companies with the greatest exposure in the international media, would accept Bitcoin as a means of payment. What was speculated would be followed by more and more companies. However, in an unexpected twist – for us, since very little could have been foreseen- Elon himself announced months later that he would stop accepting Bitcoin due to the energy cost involved in maintaining such technology. This announcement was followed by the restrictions on the use of Bitcoin imposed by the People’s Republic of China. As a result of the above, the price went back to where it was before such events, which is known as its “floor price”.

What determines the increase in the price of Bitcoin? Fundamentally, we believe that there are two separate forces: on the one hand, the number of people who want to get hold of said asset (demand); and on the other, how many people accept said asset in exchange for a good or service (offer). To the extent the more people want to grab a small portion of Bitcoin, and to the extent that more and more businesses accept that currency as payment, the price of the currency will increase its value. From the latter, the trend should be to continue rising, especially if it is conceivable that other Latin American countries, as we heard this week, are announcing that will evaluate this strategy to be implemented also in their countries.

Going back to the Law, where one of its most controversial aspects is Article 7, which establishes that “every economic agent must accept bitcoin as a form of payment when it is offered to them, by whoever acquires a good or service.” In accordance with Art. 2 of the Competition Law, it is considered as an economic agent “to any natural or legal person, public or private, dedicated directly or indirectly to an economic activity for profit or not”. Therefore, this obligation covers basically anyone involved in the exchange of a good or service to accept Bitcoin as payment after the 90 days preceding the entry into force of this Act. To this respect it is unknown yet whether there will be sanctions for those who refuse to do so, or other measures that could help to mitigate the risks associated with currency volatility, which we hope will be included in Regulation that effect is issued.

On the other hand, another controversial article is Art. 13, which establishes that “All obligations in money expressed in dollars, existing prior to the effective date of this Law, may be paid in Bitcoin.” Which conflicts with the will of all those creditors who, without knowing it, today could be forced to accept a means of payment that did not exist when the obligations that today give cause to said payments were born.

Ultimately, this matter raises us all a series of challenges that we face as a society, since no currency or means of payment is existing “chemically pure”, and all are to some extent manipulable by individuals or groups of people in power. The decision at least puts us on the world map, to take advantage of it in the best possible way.